I notice that it is possible to set up a PWM "custom" profile for both CPU fan and case fan on the ASRock H87 Pro4 motherboard.

The default temperature ranges are

50 degrees, 60 degrees, 70 degrees, 75 degrees with 80 degrees as a "max" temperature where the fan will run at full speed.   These threshold temperatures are can all be changed but I just kept them "as is".   The 80 Celsius is fixed and the fan will always run at max speed (2000rpm for this specific fan) when this temp is reached to protect the cpu.

For some reason the 4 pin CPU header on my motherboard did not seem to work correctly in that the fan would only run at either 100% or 0% PWM, so I have plugged the CPU fan into the "chassis fan 2" header which works OK.

The cpu fan has a max speed of 2000rpm at 100% PWM, and I have found that 1200rpm seems to be a good "idle" rpm as this gives good airflow yet is pretty much inaudible.

I tried to find the PWM% for 1900rpm but this would have been somewhere between 99% PWM and 100% PWM and I can only work in 1% steps so was not able to record this setting.

I used these results to set my "custom" fan profile:

Here is the bios screen setting: 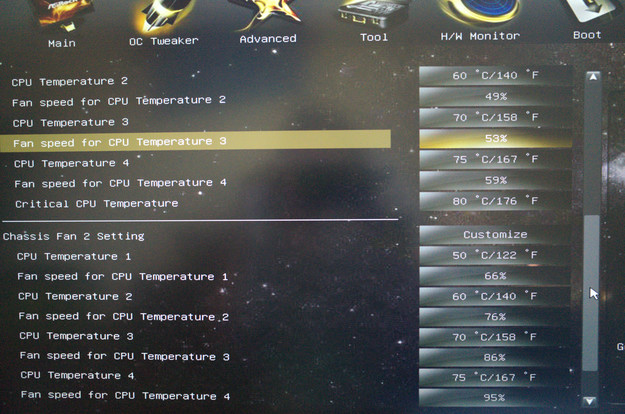 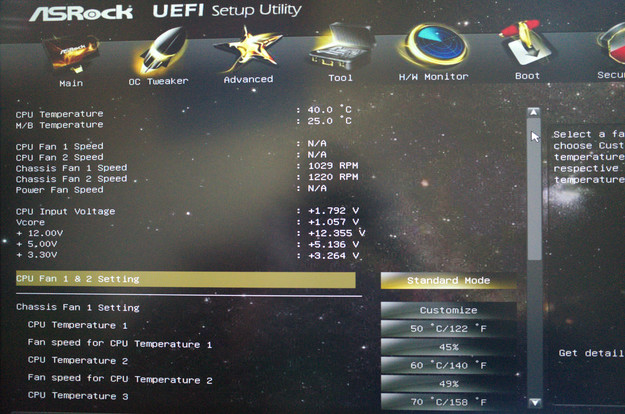