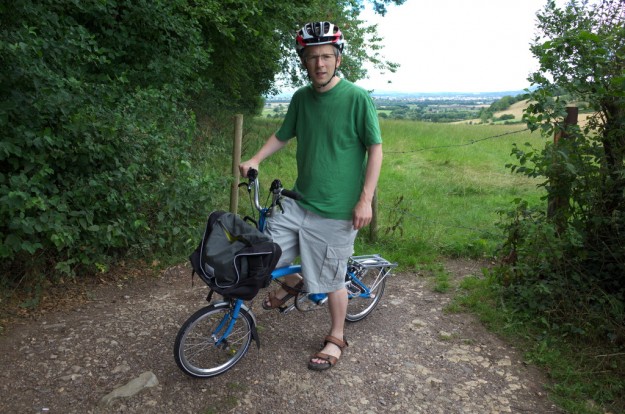 The 3 gear bike works well, but in rural Somerset there are a lot of steep hills, so I thought it would be safer to go with the 6 speed option.

After docking my hire bike at Exeter St Davids station I went to the "Bike Shed" in Exeter where I was assisted by a helpful member of staff called Keith.

They had quite a few Bromptons in stock and I did not really want to keep hiring Bromptons for the 3 months it takes to custom build to order.   As my partner was also hiring one it was costing £150 per month to hire 2 bikes, so this could have added up to £450 worth of hire charges.

At first Keith thought there were 3 M6R models in stock, but luckily it was noticed that one of these had a longer handlebar stem so it was actually a H6R rather than an M6R - I assume that the "H" stands for "High Bars"!   They look very similar as the M bars and the H bars are the same shape, just different heights.   The S bars are very different being a simple "T" shape and the P bars are also distinctive and remind me of the bars on exercise bikes at the gym.

The end result was that we departed from Exeter with 2 M6R Bromptons, one in Arctic Blue (frame plus extremities) and the other with a Hot Pink Frame and White extremities.

The "R" suffix stands for "Rack" and the advantage of a rack is that the bike is much more stable when folded as instead of resting on the dinky little wheel on the mudguard it is properly supported by the rack.  I'm thinking of getting "easy wheels" so the bike can be wheeled around easily when folded as the 4 small rack wheels would not allow rolling easily over any distance more than a few yards.

I'd imagine the rack would be handy for longer trips when more luggage room is needed than just the front mounted bag alone, using the "rack sack" bag.   I chose a "C" bag which looks like a messenger bag in style and it works really well, having 2 rear pockets which each take a large water bottle, and it has a large front pocket as well as the main bag itself.    The bag attaches to the bike frame rather than the bars so steering is not affected as it would be with a traditional "bar bag" on a conventional bike.

The bikes luckily both came with Schwalbe Marathon tyres as these offer more puncture resistance than the standard Brompton Kevlar tyres.    As I cycle along quite a few country lanes it makes sense to go with the Marathons, especially with the danger of those dreaded hedge clippings in the road!

I'd thought about getting the dynamo hub but Keith explained that a lot of people use battery lights as you are not adding weight to the bike for something that is only used some of the time, so I got some compact but very bright cateye lights instead (Cateye EL-UNO Front and Rapid 3 Rear Light Set).   I'd imagine the dynamo option would be for bespoke order only as well as it adds quite a bit to the base M6R price.