Since having my bike stolen a couple of months ago I have been thinking of getting a Brompton folding bike as a replacement.

Although I do not have a train based commute, I like the way the bike can be quickly folded and taken into the office rather than being stored in a bike shed.

It also is handy if you live in a small apartment with little storage space.

I have noticed a hire scheme called "The Brompton Dock" where you can rent a Brompton by the day.

The bikes are stored in secure lockers, normally near mainline train stations, and the doors are opened using a code system. 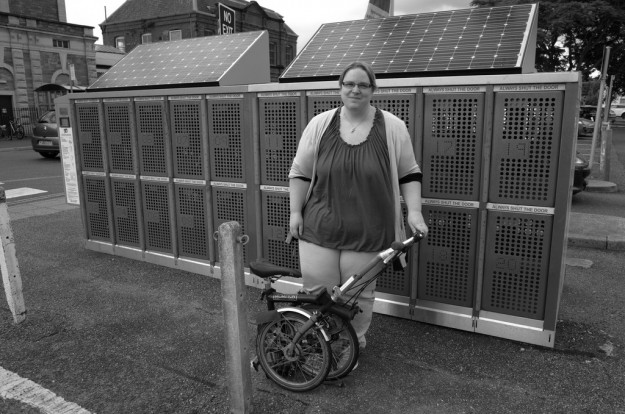 There is a certain skill required to fold and unfold the bike, which can seem a bit daunting, but it's actually quite simple.

2) Raise the seatpost (as this lock keeps the bike folded)

4) Lift bike and flick the back wheel into pace

Once unfolded it takes a bit of getting used to the way the bike rides, but it is pretty good fun to ride.

The Hire bikes have a 3 speed hub gear and mudguards, so it is essentially a "M3L" model of Brompton.

It also has the Shimano Dynamo hub with a halogen front light and a rear LED light.   It's not the top end "SON" dynamo so the front light will only work while the bike is moving, but the Shimano dynamo is a more realistic price for general use.

It comes with a telescopic seatpost, which would be handy for tall riders, but not required for shorter riders such as myself.

It also has the hard wearing "Schwalbe Marathon" tyres so ideal for a trip along the towpath from Exeter out to the Turf pub about 5 miles from the city.   The path has actually been improved in recent years and is mainly smooth tarmac now.    These tyres are supposed to be more puncture resistant, which is good as punctures can be a rail pain!

The folded bikes are quite compact and I managed to fit 2 Bromptons in the back of a Peugeot 105 with the seats folded down, but I'm thinking it might be safer to put them on the back seat with the seat belts folded through the frame just in case I ever needed to stop suddenly.